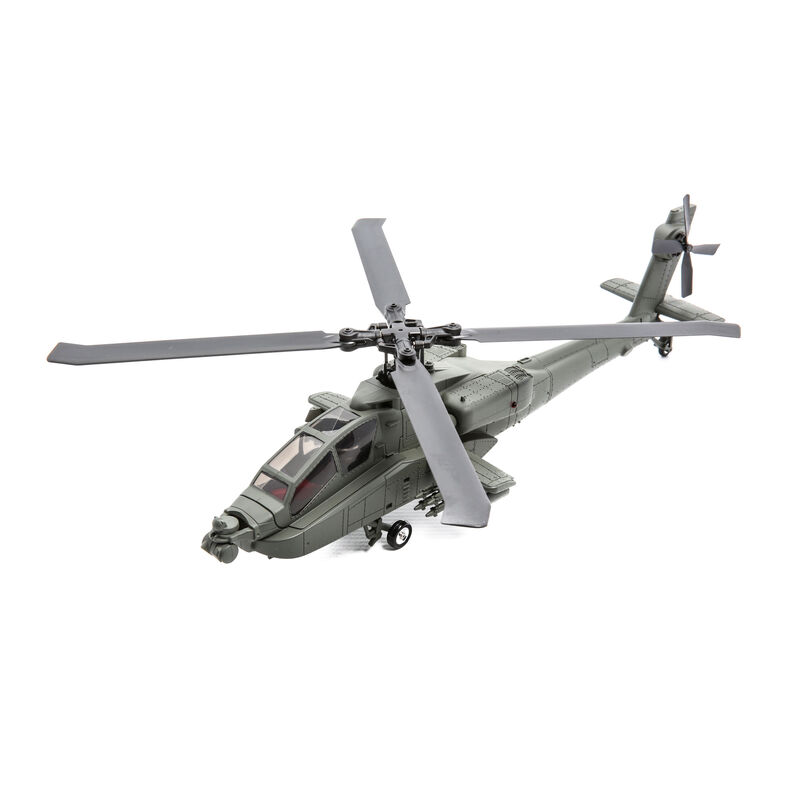 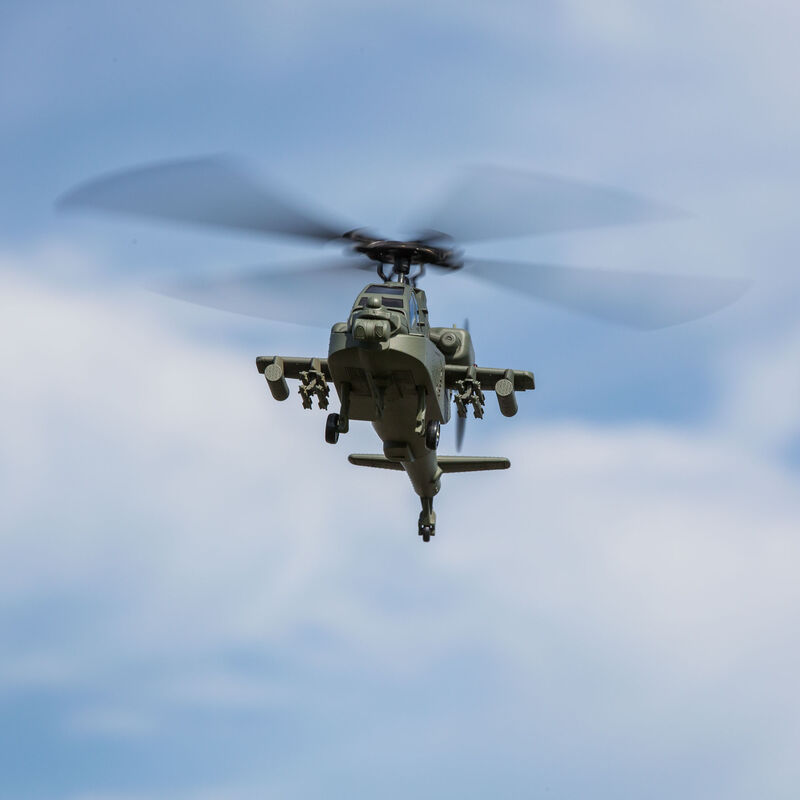 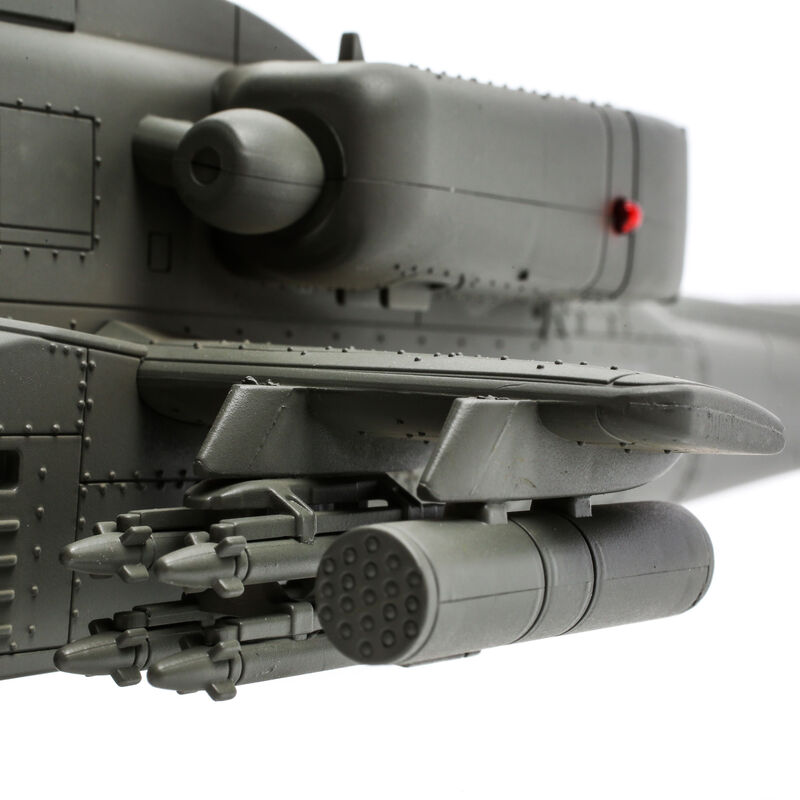 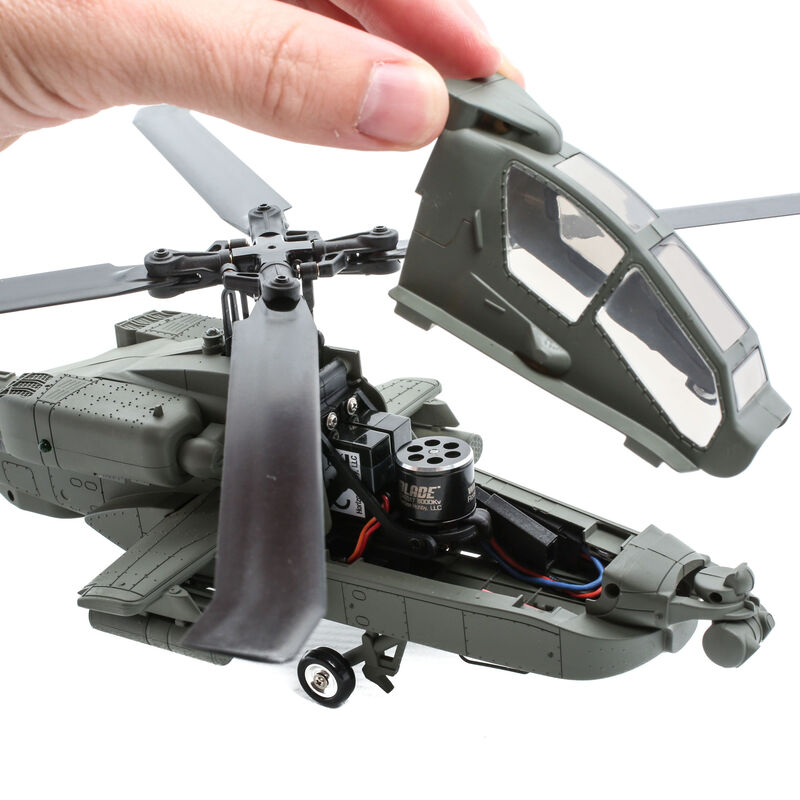 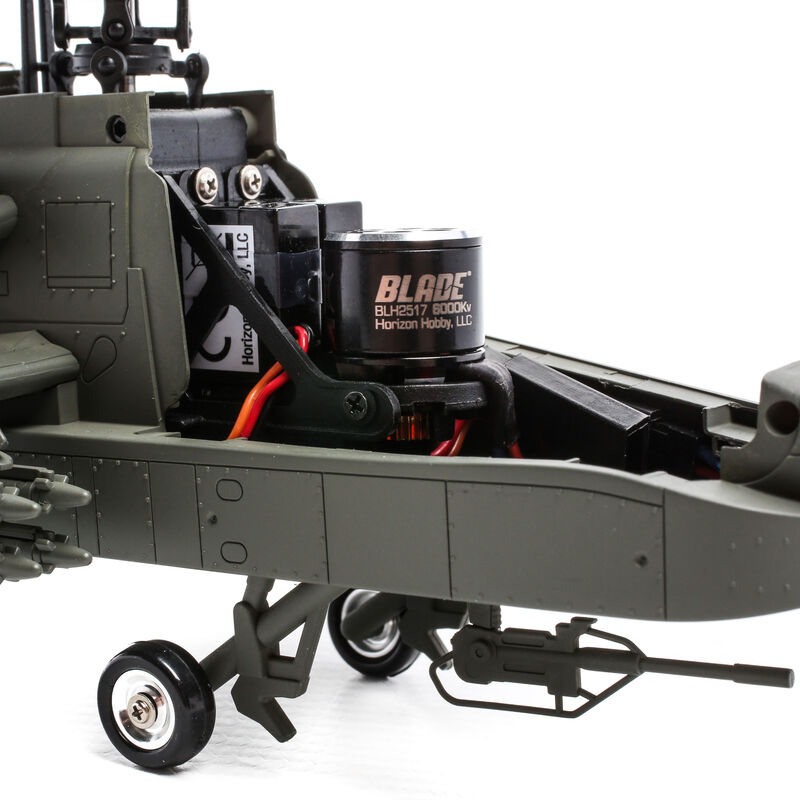 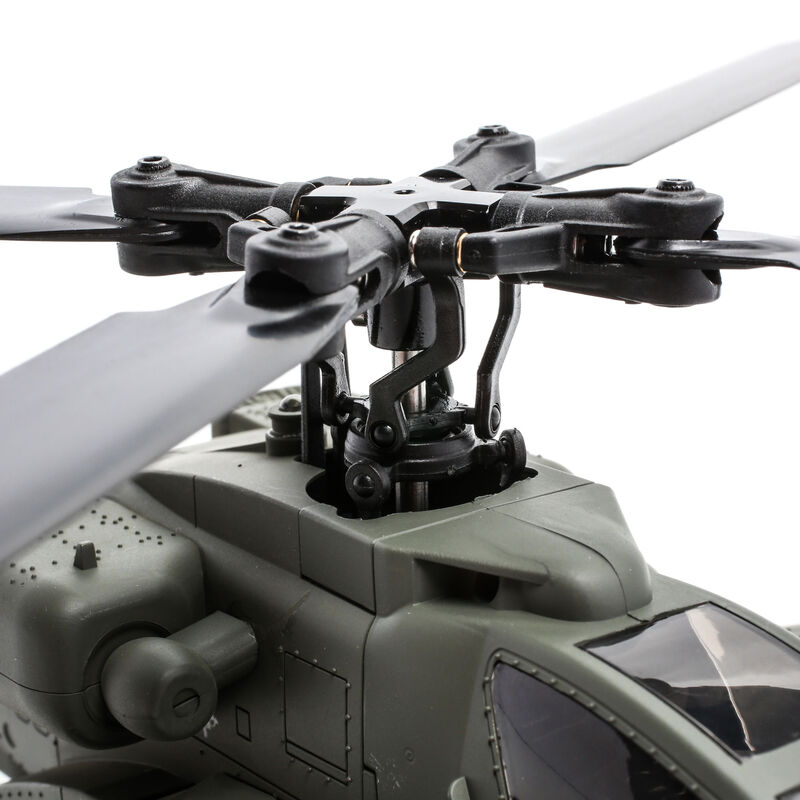 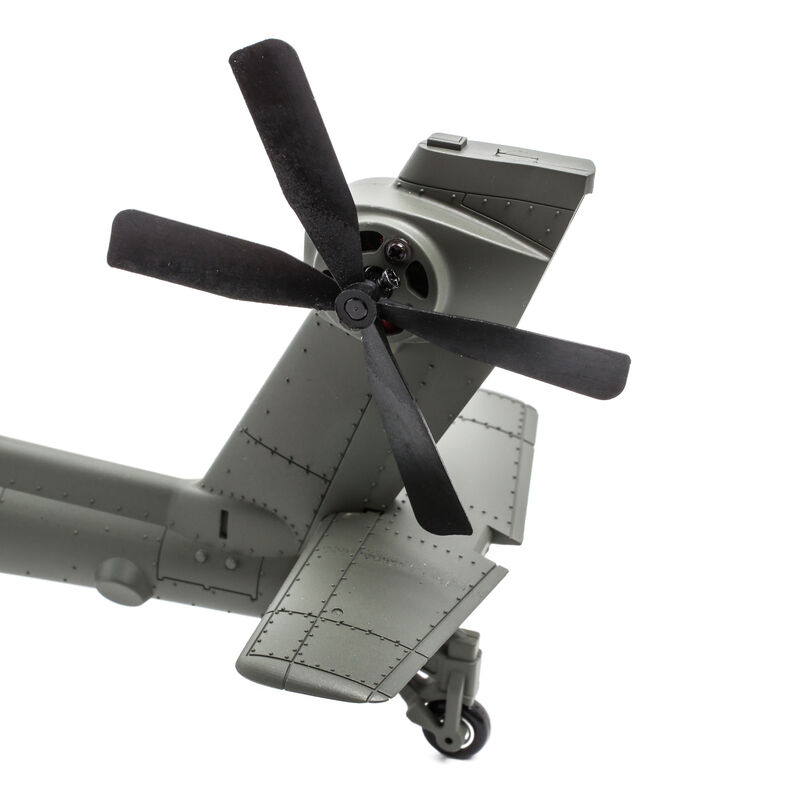 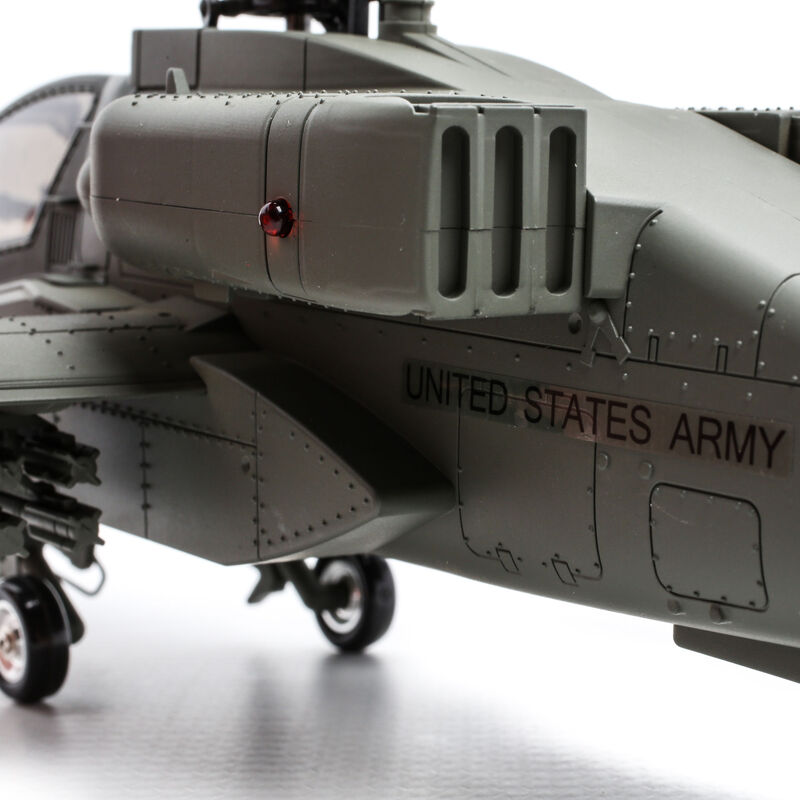 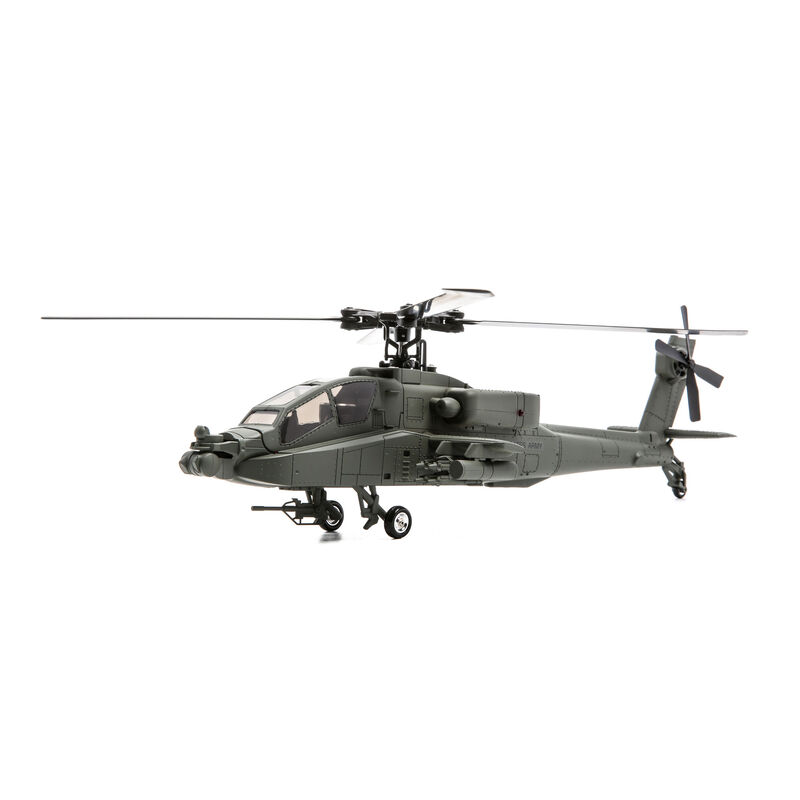 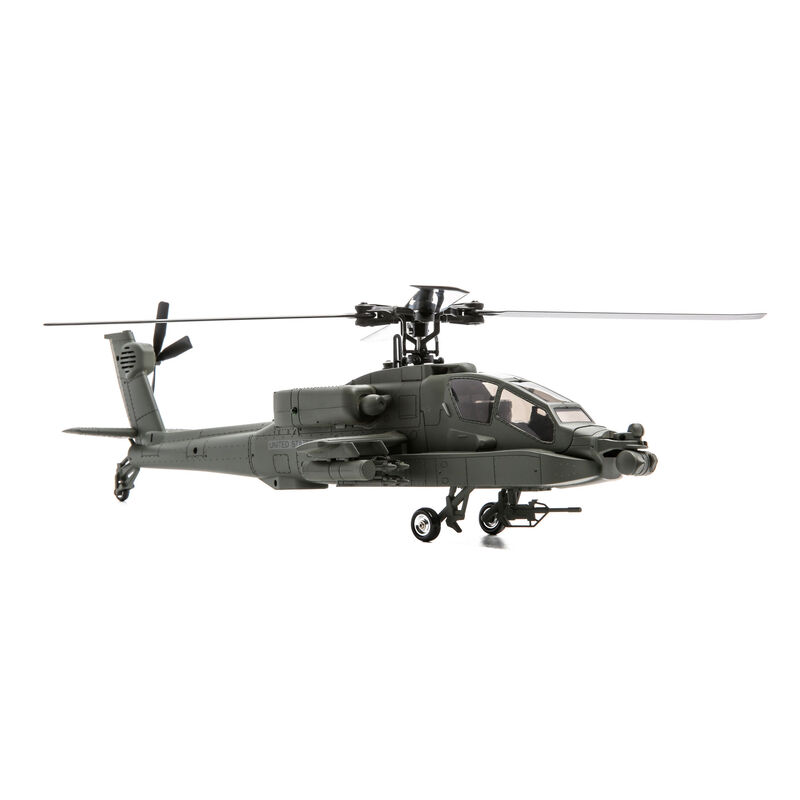 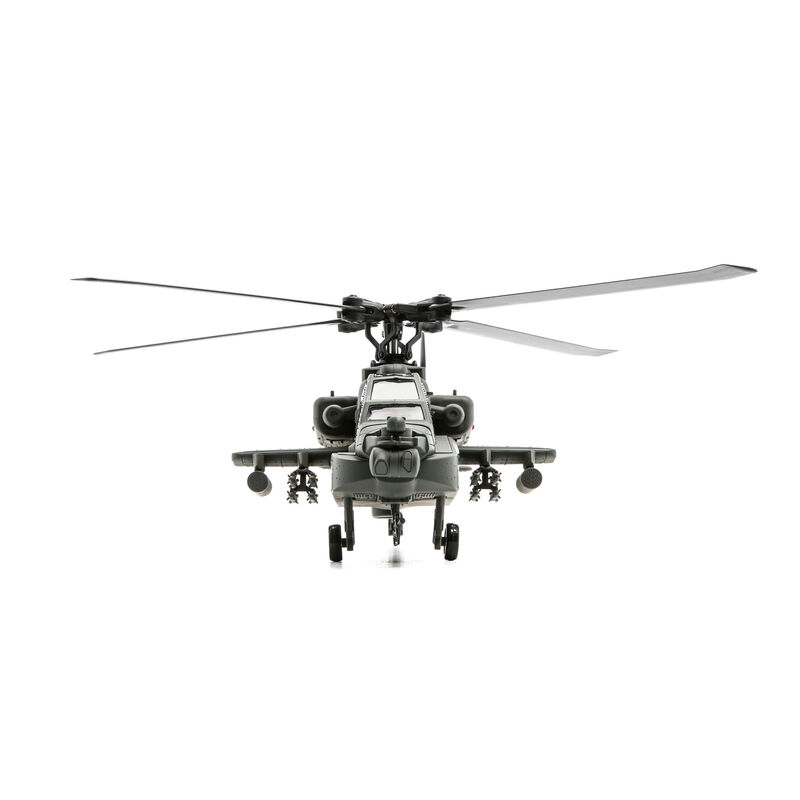 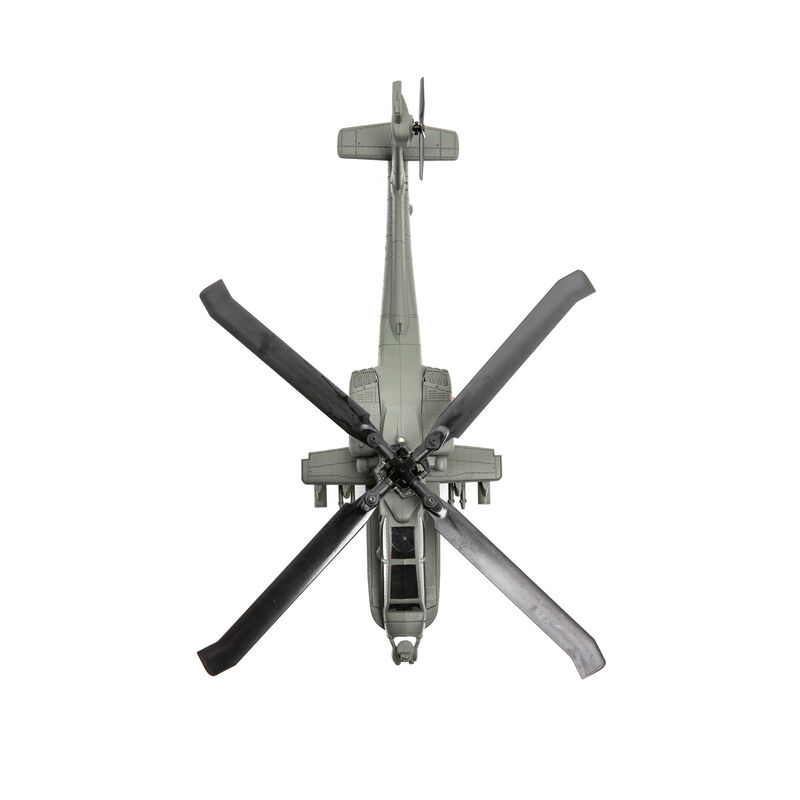 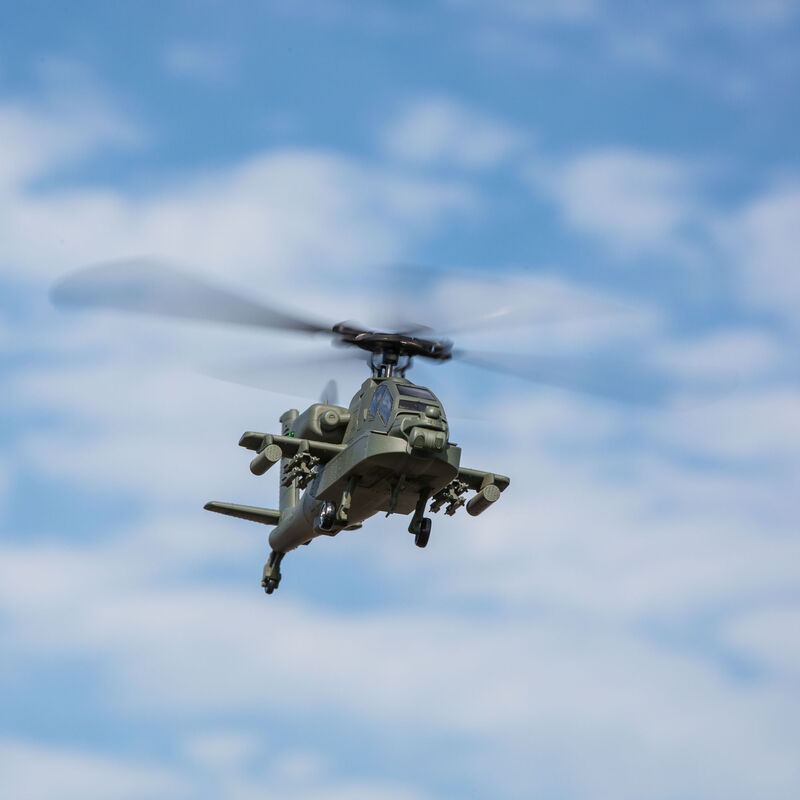 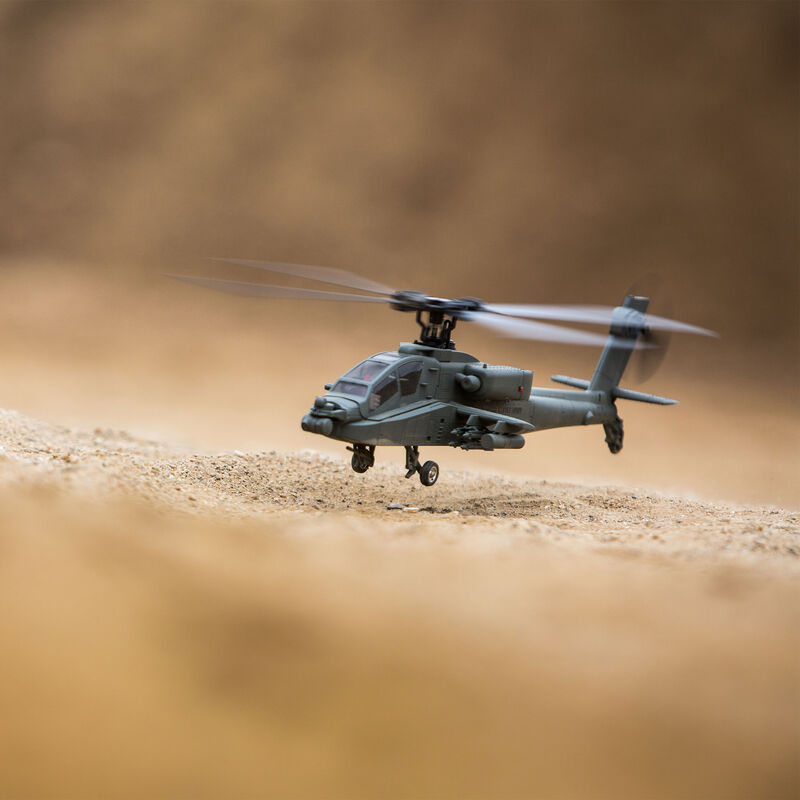 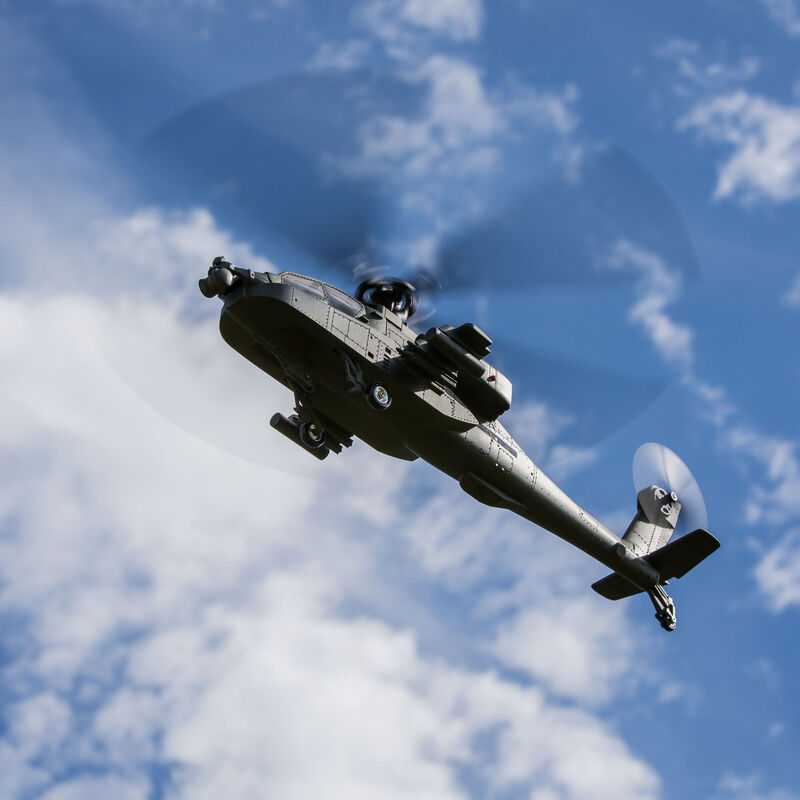 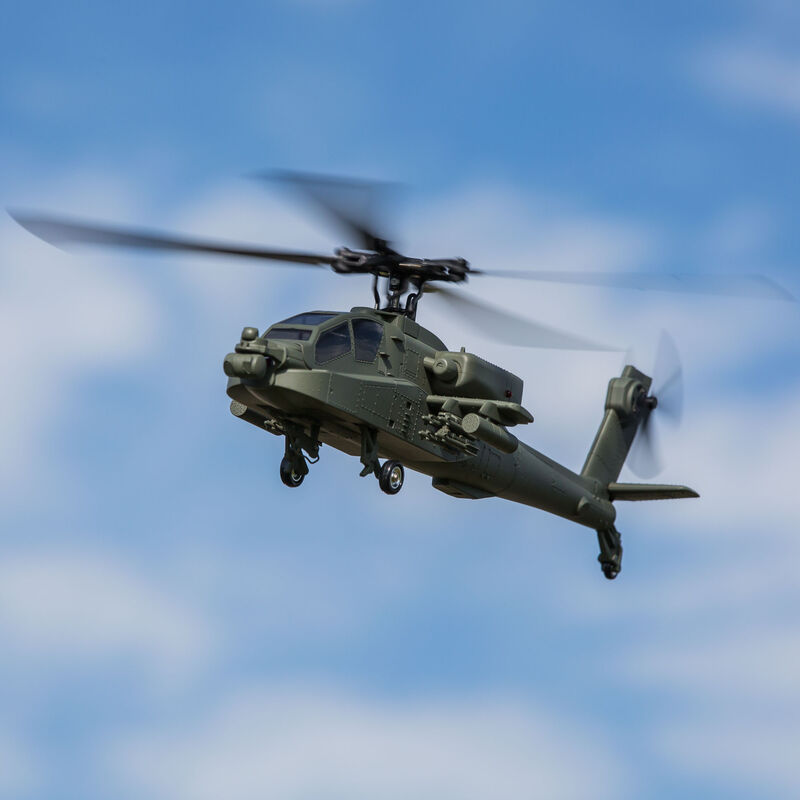 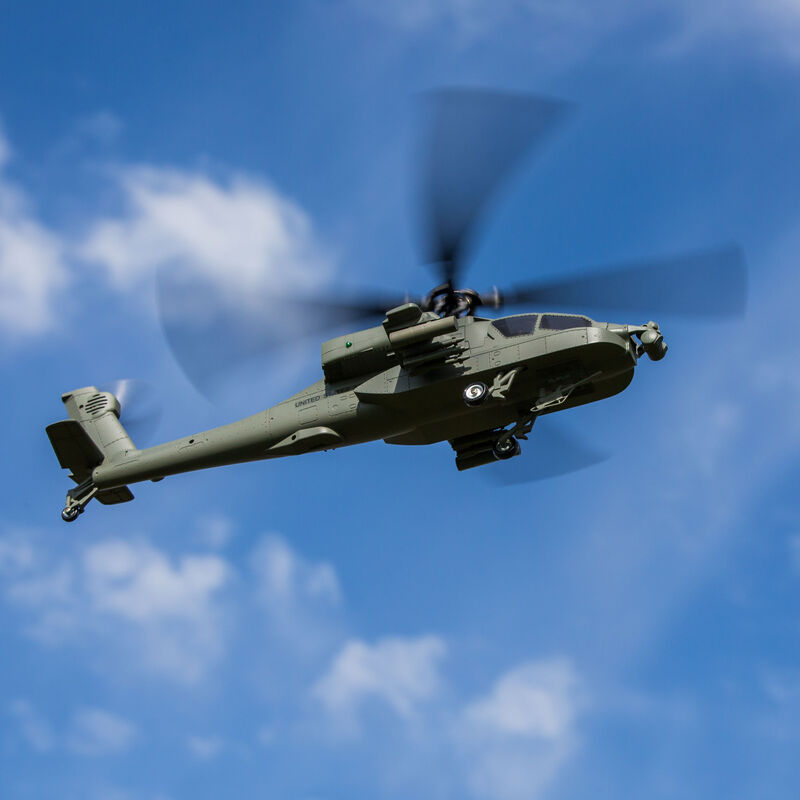 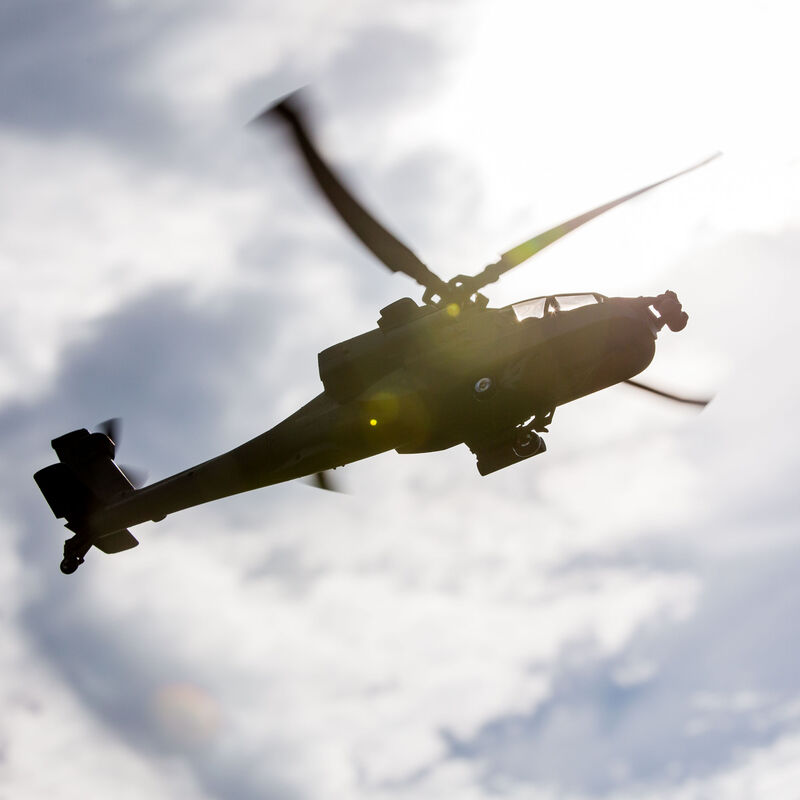 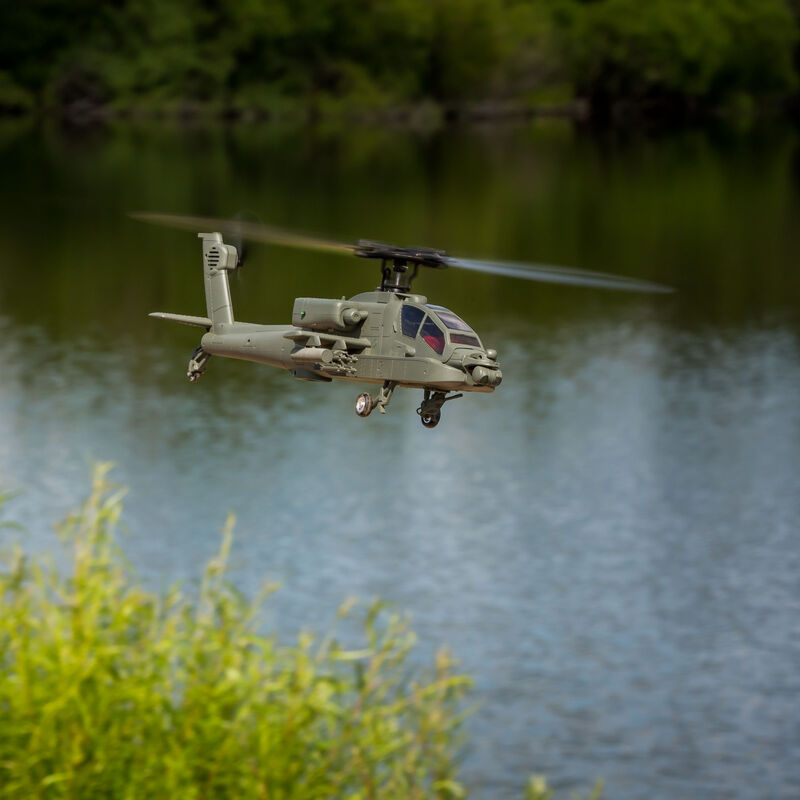 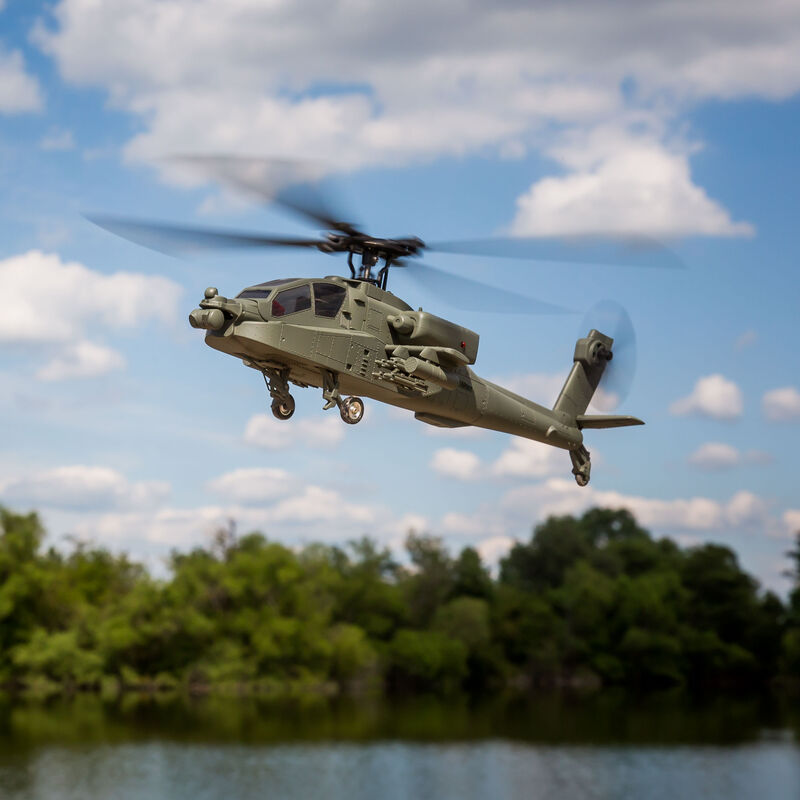 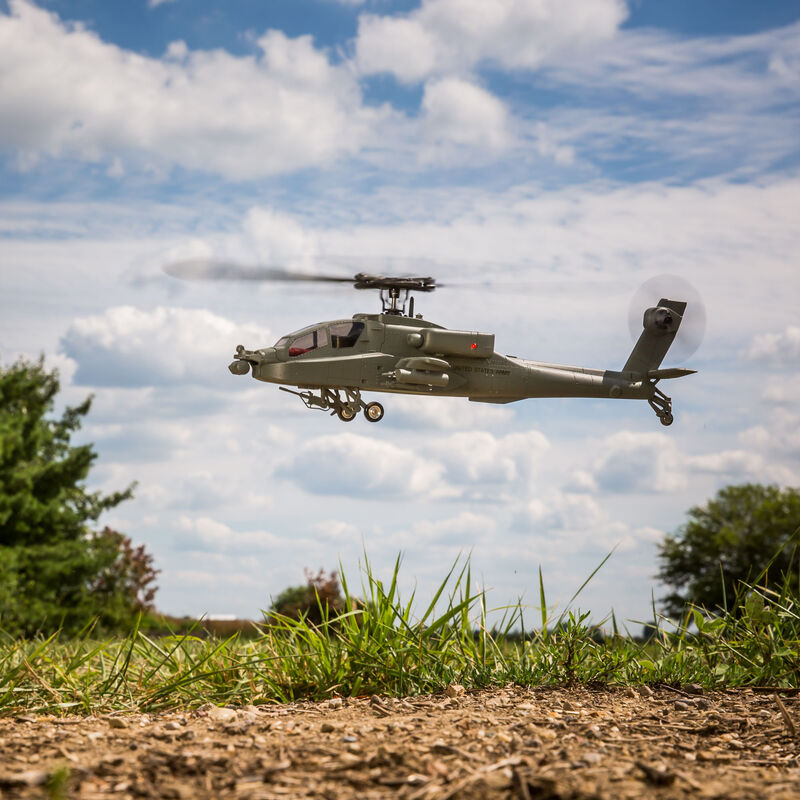 Item No. BLH2500
This Item is No Longer Available

Whenever the United States military is called upon to settle a skirmish or major conflict, the Boeing AH-64 Apache™ attack helicopter is sure to lead the fight. That’s because few VTOL capable aircraft are as well equipped, heavily armed or self-reliant. Some RC models of the Apache are large, expensive, require significant talent to assemble and even more skill to fly. The Blade® Micro AH-64 Apache captures the pride of the U.S. Army and is officially licensed by the Boeing Aircraft Company. Standout details like a functional four-blade head, collective pitch mechanics and brushless power make it enticing to the experts, while innovative SAFE® technology gives you the push-button ability to prevent a crash.

Put yourself in the action with the Blade® Micro AH-64 Apache™ scale helicopter. Engineered around the abilities of innovative AS3X® flybarless technology, its rock-solid flight performance makes flying this highly-detailed heli as comfortable as possible. Although the machine looks like a heavy hitter, it’s crisply detailed molded body is lightweight. Rotary ultra micro servos are uniquely mounted for an efficient link that also allows the four-blade head to mount as low as possible for a brilliant scale affect. Brushless power is used at the main gear to offer gutsy cyclic and collective performance while a fast-response motor on the four-blade tail rotor keeps your headings locked in. Whether you’re new to scale heli flight or seasoned heli expert, this is one heli hero you won’t want to keep tied down.

The Blade® Micro AH-64 Apache™ features exclusive SAFE (Sensor Assisted Flight Envelope) technology, a revolutionary electronic flight envelope protection system that gives you the protection of Panic Recovery mode which returns the heli to level flight so you can prevent a crash at the push of a button.

At the center of its amazing abilities is the proven AS3X® (Artificial Stabilization - 3-aXis) Flybarless System that gives the Micro AH-64 Apache ™its perfect balance of agility and stability.

The hard plastic body features a scale outline and rich detail striking enough to be officially licensed by Boeing Aircraft Company. Beyond static appearance, the four-blade head and tail add a functional level of authenticity you’ll appreciate while flying.

Both the main rotor and tail rotors feature brushless outrunner motors for the power to fly outdoors and muscle through aggressive maneuvers. The main rotor is geared specifically for scale four-blade head performance. The tail rotor is a high-speed, direct-drive outrunner with a tail rotor that has a realistic four-blade appearance.

Whether you’re flying at a large indoor area or outside patrolling your backyard, the collective pitch mechanics give a true to scale flying experience that’s both stable in forward flight and while hovering.

Included Inside the Box